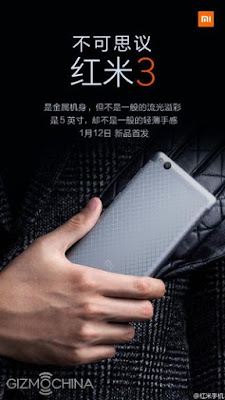 Xiaomi has teased Redmi 3 smartphone with metal back. It is the sequel of Xiaomi Redmi 2, the Xiaomi Redmi 2 has already passed TENAA certification. According to TENAA certification this smartphone will sport a 5” 720p display 2GB of RAM and 16GB of internal storage. A 13 mega-pixel rear camer and 5 mega-pixel front-facing shooter is also in tow. It will get power from a massive 4100 mAh battery with thicknes of 8.5mm.