Posted on February 2, 2016March 8, 2020 by Admin
As Xiaomi Mi5 is scheduled to be launched on 24th February, we are seeing new information about this device every day.
First Xiaomi’s Senior VP Liwan Jiang confirmed that the device will be launched on February 24th at a media event, now Xiaomi VP Hugo Barra has, confirmed three most important features of the device- Display resolution, NFC and Dual-SIM connectivity. He posted a screenshot of his Mi5’s homescreen on twitter and asked peoples to check what is new. He posted- “Here’s a little sneak preview of my #Mi5 home screen. Spot anything new? Can you see what’s new with Mi5 launching on February 24th? Which feature excites you most? 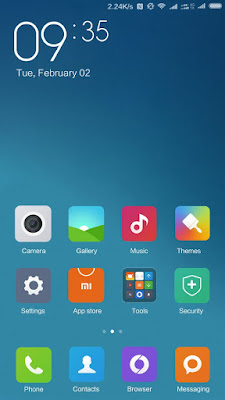 As seen on image, the smartphone will have NFC support, watch at  the right side after NFC logo you will find the Dual SIM network that means the smartphone will come with dual SIM card slots, which confirms previous rumors for the NFC and Dual SIM Connectivity. The screenshot shared by Hugo Barra is 1920*1080 pixels, which confirms at least one variant of the handset will have a 1080p display. The premium version of  Mi5 is expected to feature a 2K  resolution QHD display. As per the leaks, it will be powered by Snapdragon  820 processor.

The Mi5 will be available in two variants one with metal back and a 1080p full HD display, paired with 3GB RAM and 32GB internal storage, 4GB RAM and 64GB internal storage, the premium version will have a glass back and a 2K QHD display with 4GB RAM and 32GB and 64GB of onboard storage.
Both variants will be equipped with a 16MP rear camera with LED Flash and a 8MP front-facing shooter, will be running on Android 6.0 Marshmallow with MIUIv7 and a 3600 mAh battery with fast charging support. The smartphone is also rumored to be available as a Windows 10 Mobile variant as well.