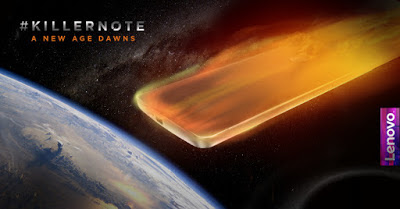 Lenovo K4 Note is upgraded version of Lenovo K3 Note which was launched last year on Flipkart and had set new benchmarks in sub-Rs. 10,000 phablets in India by offering 2GB RAM and 1080p display at such a reasonable price.

From the teasers released so far, we know that the K4 Note will have brushed metal frame on back, a killer display- we still don’t know what company will offer in display compartment, NFC chip, a Fingerprint sensor on back, it will also come with dual front facing speakers.

The device will come equipped with 3GB RAM as compared to 2GB on K3 Note and 32GB of internal storage which is 16GB in case of K3 Note.

Last year top two selling smartphones on Flipkart were both from Lenovo, so it is expected that this device will also come with great features just like K3 Note at a reasonable price. It is expected to be priced between Rs.10,000- Rs. 15,000
Other details are unknown at the moment. But we will let you know all the specs and features of the phone when it launches later today.