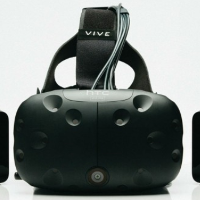 HTC’s Virtual Reality (VR) headset, the HTC Vive,  will be available for pre-orders starting 29th February.  HTC’s Co-founder and CEO Cher Wang says the company is focusing on Virtual Reality and away from smartphones. According to him, HTC is now more realistic.  HTC had also launched revised developer kit at CES 2016 for Vive VR that includes the front-facing camera that can add a dose of reality to Vive VR headset.

” Yes smartphones are important,  but to create a natural extension to other connected devices like wearables and Virtual Reality is more important…I think
the problem was competition – Apple, Xiaomi, these companies spend tons of money on communications and marketing, they pump a huge amount of investment into the market. There are a lot of Chinese competitors.”

HTC has partnered with Valve,  a video game developer company which uses Valve’s steam VR technology and are continuing to work with other innovative companies to create contents like gaming,  entertainment, medical and education.

HTC has not announced any details about pricing. The release of HTC Vive’s comes after Oculus Rift VR headset,  which is priced at $599 and will ship in March.